Our sixth week of discover began with the singing of There is a hope and prayer.

Instead of a memory verse this week, we enjoyed a quiz which was based around anagrams of books of the Bible, some of which proved more challenging than others.

After the quiz, we had time for a couple of children’s choices, before they went out for their activities.

This was the final week of our Christianity Explored Course and Alan came up to read from Mark 10:13-27, ahead of David Angell coming up to speak on the subject of Grace: how can God accept us?

Below are tweets from David’s talk:

Final week of #ChristianityExplored at #discover today. Join us from 11.30am. Catch up online at http://t.co/W0Gu3oM3Sh

This morning in #discover we're looking at the subject of 'Grace: how can God accept us?' with David Angell.

The rich young ruler in the reading from Mark 10 thinks he has everything, but wants something more. He felt he could earn eternal life.

In Mark 10:17, the man asks Jesus 'Good teacher, what must I do to inherit eternal life?'. Jesus replied 'Why do you call me good?'

Jesus goes on to list some of the Ten Commandments and the man replies that he has kept these since he was a boy.

The man is comparing himself to other people. 'Surely I'm good enough'. Jesus points out gently that this is not enough.

Jesus tells him to sell what he had, give to the poor and follow Him. If he really had wanted it, the man would have done it.

The first command is to love God with all your heart. No matter what the man had done, he wasn't good enough for God.

Jesus said 'How hard it is for the rich to enter the kingdom of God!'. There is nothing we can do that will please God.

No matter what we do, we're not good enough for God. Jesus tells us to come to God like a child in Mark 10:15.

All we can do is to reach out and receive what God has done for us through Jesus' death on the cross.

Jesus died on the cross because we needed a Saviour. He took our place and God's anger on Him. We just have to freely receive His gift.

We can't try and bargain with God over eternal life. We just have to accept His free gift of eternal life to us.

Mark's gospel is about the good news of Jesus' death and resurrection. We just have to accept He died for us.

You can download Alan’s talk by right-clicking on the link below and selecting ‘Save link as…’.  Alternatively, press the play button to listen directly from the website.

After being with us at Parkside for over 50 years, Elizabeth is moving to be closer to her son, Nigel.

We arranged a small tea to bid her farewell and David Angell gave a short speech recounting some of her moments while she has been with us at Parkside.

He also presented her with a card and some vouchers for her to spend on something for her new house.

We’ll miss her at Parkside, but we know she’ll be back to visit us again soon.

Below are a few photos from the afternoon: 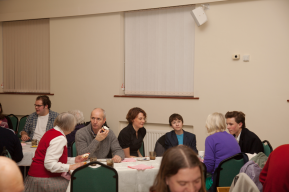 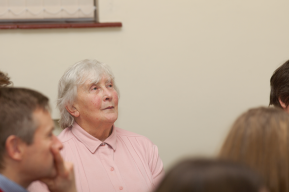 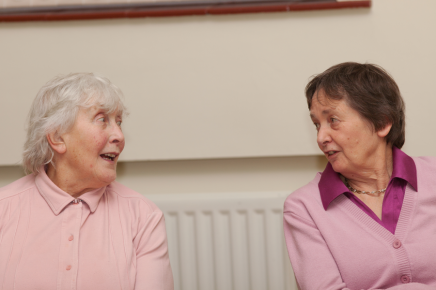 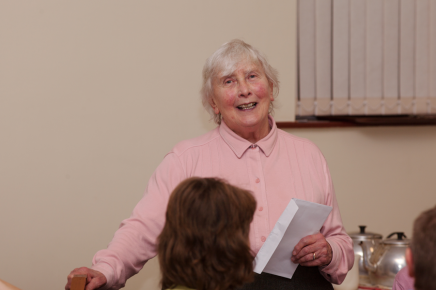 We started our fourth discover by singing All I once held dear and prayer.

Afterwards, it was time to learn our second memory verse, which was taken again from Psalms.

As before, the words were made to gradually disappear as the verse was repeated. Hopefully more will have remembered it than for the previous verse.

After some children’s choruses we sang Open our eyes, Lord before the children adjourned for their classes.

For those who were left, Alan read the reading from Mark 15:22-39 before David came up to speak on the fourth of our six weeks of Christianity Explored.  His subject this week was The Cross: Why did Jesus die?

Below are tweets from the morning:

Today at #discover, we're looking at 'The cross: Why did Jesus die?'. Why do Christians make the cross the centre of their faith?

Today, David will look at what happened when Jesus died on the cross, what that means and how people reacted to it.

Darkness in Mark 15:33 was not an eclipse. This was caused by God's anger. Verse 34 gives the reason: 'My God, why have you forsaken me?'.

God is angry about our sin. But God's anger fell upon His Son Jesus who took our sin upon Him, on the cross at Calvary.

Mark 15 37-38 tells us that when Jesus died, the curtain of the temple was torn from top to bottom indicating there is a way back to God.

Jesus took our sins on Him and paid the debt that was ours, when He died on the cross. We now have access back to God through faith.

Those who crucified Jesus cast lots for His clothes. His death was nothing special to them. What about us?

The chief priests and teachers of the law were happy with their teaching. Pilate knew what was right but went with the flow. How about us?

The centurian in Mark 15:39 realised that Jesus was the Son of God. We're left with a choice. Will you keep your sins or take them to Jesus?

You can download David’s talk by right-clicking on the link below and selecting ‘Save link as…’.  Alternatively, press the play button to listen directly from the website.

Our second week of discover began with the singing of In Christ Alone and Victor opening in prayer.

Phil, who was chairing, then introduced a memory verse for us to learn for next week.  This had been taken from those in the Psalms which are regularly tweeted from the Parkside Twitter account.

As we read through the verse, words gradually disappeared.  A prize will be offered next week when people will be asked to repeat the verse.

After we had sung a few children’s choices – and Happy Birthday to Becky – the children departed for their classes.

Alan read through the story of Jesus healing a dead girl from Mark 5 before David Angell came up to take us through the second part of our Christianity Explored course – Who is Jesus.

Using verses from Mark, David talked through how Jesus has power and authority to teach, over sickness, over nature, over death and finally to forgive sin.

You can see the full presentation from the morning, including David’s slides here: 20140112 – Discover Week 2.

Today in #discover, we're looking at the subject 'Who is Jesus?'

Jesus taught as one who had authority to teach in the synagogue. He also had power over sickness and authority over nature.

You can download David’s talk by right-clicking on the link below and selecting ‘Save link as…’.  Alternatively, press the play button to listen directly from the website.

We had a good turnout of around 45 people at our final Family Service of the year.

This month it was hosted by Phil Bray and began with the singing of Down from His Glory and prayer.

The second chorus was Wonderful Grace which was followed by a Bonfire Night matching pairs quiz.  Mention was also made of the upcoming events in December which we’re calling Step into Christmas.

After the quiz the children enjoyed a number of their favourite choruse from Sunday Club before David Angell came to speak.

David began by asking the question ‘Who moved the stone?’ before linking it in to the story of Jesus appearing to his disciples after the resurrection and Thomas not being with them.

He went on to explain that Thomas was with them when they next met and Jesus appeared again and invited Thomas to touch his hands and feet and to see the wounds.  Thomas simply replied ‘My Lord and My God’.

David went on to talk about the different miracles that we have looked at in the Family Services this year and the fact that they are signs that point us to Jesus.  The greatest sign of all is his resurrection back to heaven and the fact that he has promised that he will return.

He went on, in a powerful message, to point out that death is not the end and one day all on earth will bow their knee to God.

We won’t have a normal Family Service in December but will have our Carols by Candlelight on Christmas Eve following on from our Step into Christmas.

Our next planned Family Service will be on 15th January 2012.