Much of the below history was written by Hedley Bray, who was one of those who moved into the new hall in 1956.  Hedley passed away in January 2011.

Our earliest records go back to 1895 when around 30 Christians were meeting in the old Oddfellows Hall in Brock Lane, Maidenhead.

This record clearly indicates that these meetings were already in existence.  But before this, it is known that, in the early 1890s, there were those who, on Sundays, walked out to Holyport to meet together in a barn owned by a local Christian, a Mrs. Mansbridge.  Three of those who walked out to Holyport were Mr. Edward Free, Mr. John Pearson and Mr. Hugh Butcher – Mr. Edward Free being the grandfather of Mrs. Beryl Good.

In these early days, an Irish evangelist – Mr. Tocher – used to visit Maidenhead in the summer with a caravan and, later, with a motor bike. 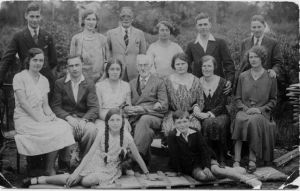 He travelled around the local villages and, on one occasion, his caravan was pushed into a pond by some local youths – one of whom was William Smith.  He subsequently became a Christian and took a keen and active part in local Bible teaching and other outreach work.  Some of his descendents are still with us here today!

In 1905, we moved from the Oddfellows Hall to the Old Drill Hall in Marlow Road (later known as Pearce Hall and now the site on which the War Graves Commission offices are built). We remained there until 1940 – apart from a break in 1914 – 1918 when we had to go back to the Oddfellows Hall and to other locations in the town, as the Old Drill Hall was required for use as a hospital during the first World War.  In 1940, we were offered the use of a hall in Holmanleaze as Mr. Matthews, who had built the hall and had used it as a gospel mission, had left the area.  We continued to rent this hall until, in 1956, we moved into Parkside Hall.

It was as long ago as 1928 that the Building Fund was started. In 1938, this very suitable site was located and was sold to us, after several refusals, by Major Pearce, whose father presented Kidwells Park to the town,  After paying for this, a balance of £15.9s.2d remained in the Fund. In 1943, an additional plot was purchased, extending the site back to Kidwells Park.  During and after the War years, the site was well used regularly as allotments for growing vegetables etc.

We applied for a licence to build in 1948 and again in 1949 – but were refused.  In 1952, we again discussed the possibility of applying for a licence – and it was at this time that Mr. Johnson, builder, of the Slough meeting, heard of our deliberations and offered his advice and practical help. This, of course, necessitated visits to the site including one occasion when, according to the record, ‘he trampled about among the cabbages’!  Briefly, the outcome was that, after what seemed to be inexplicable delays, we were told in November 1953 that a licence to build was available when we required it. Further delays occurred throughout 1954 over local planning approvals. These problems were finally overcome and building work commenced in Autumn 1955.

The first meetings in the new hall were held on Sunday, 9th December 1956. A special Thanksgiving Service was held on 15th December 1956 – primarily to give thanks to God for His guidance and provision over the years so that the total cost of the building and furnishing had been fully met. Thanks were also expressed to Mr. Johnson, builder, who had carried out the work on a ‘no profit’ basis – and to two others who had provided, respectively, the heating/plumbing installation and the electrical work on a ‘materials only’ basis – and to numerous others who had provided skilled and unskilled labour and had given much of the internal fittings and equipment.

The original building has been extended over the years – a flat-roofed extension at the rear of the building in 1972 to provide additional classroom space and this was further developed in 1984 with the installation of a small upper room with a pitched roof.  In 2004, we were required to install a ‘disabled toilet’ – necessitating (after 48 years) an exchange of location of the respective cloakroom facilities.

In 2006 we celebrated our Golden Jubilee since our move to St Lukes Road.

In 2010 we changed our name from Parkside Hall to Parkside Christian Fellowship.