We enjoyed an excellent time at our Easter Sunday Family Service, with almost sixty people joining us for the morning and the hall decked out with daffodils.

Hosted by Phil, we began by singing Come and see followed by prayer.

After a short welcome including the dates for the resumption of Sunday Club as well as the next scheduled Family Service, we moved on to our first reading from Luke 23:44-47, which was read by Rebekah.

This was followed by the singing of Oh to see the dawn and our second reading, from Matthew 28:1-6, which was delivered by Brian.

Our third hymn was See what a morning, which was followed by an entertaining Easter themed quiz consisting of general knowledge questions about Easter.

Afterwards, we watched a short animated video of the Easter story, shown below:

Before Paul came up to speak to us, we sung Jesus Christ is alive today and I’m Special.

Paul Cogger came up and spoke briefly about life, highlighting various verses and explaining how important Easter is to Christians and how it is that we can obtain eternal life through the work Jesus did for us in his death on the cross.

Paul also talked about goodie bags which we would be handing out at the end of the Family Service.

These each contained a number of items including invites to forthcoming events, a booklet entitled What’s the point of Easter, an activity story (Josh and Jade at Easter) and colouring for children and a creme egg.  Ladies were also given some of the many daffodils decorating the hall.

If you’re interested in obtaining a copy of either of these two publications, please either click on the images to order online, or alternatively contact us and we would be happy to send you one.

The Family Service ended with the singing of Led like a lamb and prayer.

It was followed by a selection of refreshments which included hot cross buns.

Following an extensive campaign including creation of posters, invitations, social media and even a press-release for the Maidenhead Advertiser, we were pleased to welcome over 50 people for the first in our series of carol services in December entitled Step into Christmas. 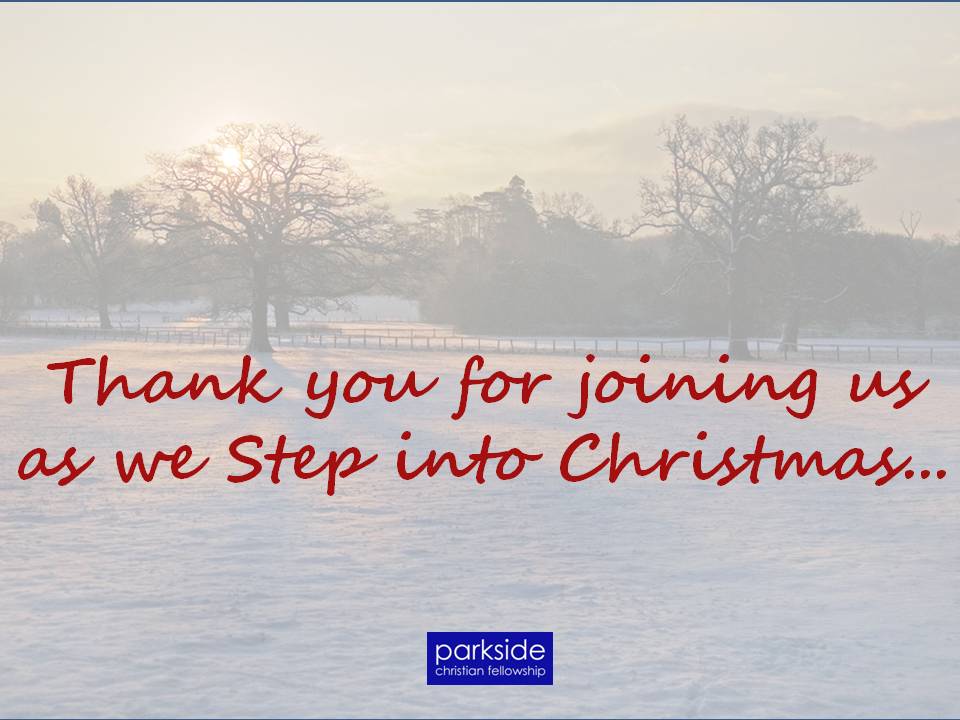 The opening service was hosted by Phil Bray and began with the carol O little town of Bethlehem which was followed by prayer.

Phil ran through the titles of the different services coming up and also mentioned a little about the planned Family Services for 2012 – the first of which will take place on 15th January at 11.30am.  The topic for the year will be Celebrations.

Our second carol was It came upon the midnight clear.

After the carol, we had the first part 0f an Advent Calendar themed Quiz.  There were 24 envelopes hung on the Christmas tree and two teams (Christmas Puddings and Mince Pies) each took it in turns to send someone up to choose an envelope.  Each contained a unique number from 1 to 24 and a chocolate coin.

The number inside was linked to a question about Christmas, from the Advent calendar on the screen, with the points determined by the value of the number.  Higher value numbers generally meant that the questions were likely to be harder.

At the end of the quiz the running points totals were: Mince Pies 52 points and Christmas Puddings 46 points.  This will continue for the next two weeks before prizes are awarded!

Our third carol was The Servant King, also known as From heaven you came.

After this, David Angell came up for a couple of minutes to talk about ‘What Christmas means to me‘.  David brought out his fondness to listening to Carols from Kings each year on Christmas Eve as well as touching on the real reason for Christmas.

After David had finished we sang Once in royal David’s city before Alan came up to speak on the opening topic – Christmas: The Plan.

Alan brought out, using the example of the work of Canadian artist Lewis Lavoie, that God viewed Christmas by looking at it from the ‘Big Picture’.  Alan ran through numerous examples in the Old Testament where it confirmed the timing and location where the birth of Jesus would take place and the fact that it was all part of God’s plan for Christmas.

He also looked at the practical issues concerning the people involved in the story before finishing by reminding people that although we think of Jesus as a baby at Christmas, he didn’t stay that way and grew into a man who ultimately gave his life on the cross at Calvary.

After Alan had finished and closed in prayer, we enjoyed mince pies and other refreshments.

Everything seemed to work together well and we were encouraged by a positive beginning to the series of Step into Christmas.  Next week we have Victor taking the subject of Christmas: The Person.

You can see some of Lewis Lavoie’s amazing work below:

Footage from the BBC Planet Earth series set to the song ‘Creation calls’ by Brian Doerkson, this shows the amazing power of God’s creation.