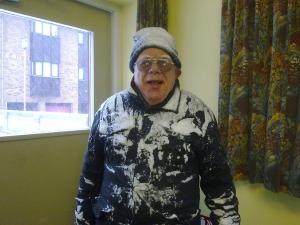 David emerges from the snow!

Our plans for the outreach in the High Street this morning were somewhat scuppered by the five inches of snow that fell during the morning.

The original idea was to spend 45 minutes in the High Street giving out invitations to the Candlelit Carol Service, as well as two or three giving a short word about Christmas.  In addition, we had prepared some wordsearches and bubbles to give away to the children.

Following a short time of prayer, we decided to head through the snow into the High St and split our resources to have people at every entrance to the Nicholson’s Centre.

The snow was falling heavily and we decided to focus on handing out invitations to the Carol Service rather than anything else.

We were able to give away over 250 tracts and invitations to the Carol Service altogether, and although our original plans weren’t able to be completed, we felt that it was still a worthwhile exercise to have carried out and pray that there may be those who will come along tomorrow as a result.

Afterwards, we gathered in Costa Coffee to thaw out and review the exercise before heading back to Parkside to retrieve our cars buried in the snowy car park.